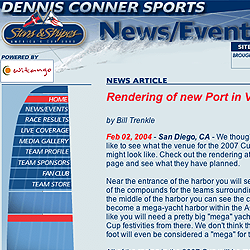 Building on the success of the site produced for the 2000 America's Cup, Dennis Connor and his Stars & Stripes syndicate hired my new company (Bathysphere) to design and produce the site for the 2003 cup. Responsible for design, development, technology sponsorship development and interactive strategy. Developed and launched the first live-commentary race coverage application on any of the competing syndicate sites during the 2003 America’s Cup (supporting thousands of concurrent users during races).